If you're a fan of the universe and astronomy, you need to see the incredible Nebra Sky Disk in Saxony-Anhalt, Germany. Here's why:

Every now and then, you come across something on your travels that you’ve never seen or even heard about that completely blows your mind. I had such a moment when I visited the Saxony-Anhalt region of Germany a few weeks ago, as part of the #Transromanica blogger trip.

While the trip was all about showing us the Romanesque heritage of the area, and involved mostly churches, cathedrals, abbeys and monasteries, at one of the stops in the small town of Wangen (Unstrut), I managed to squeeze in a visit to a museum that made me very happy (as the Space Geek that I am).

Right next to Wangen, lies ‘Nebra’ and this is the location a story that could have come right out of a mystery novel:

In 1999, two treasure hunters (Henry Westphal and Mario Renner) found something that let their metal detector go wild: in a field they discovered a huge bronze disk, two bronze swords, two hatchets, a chisel and fragments of spiral bracelets.

Now, of course this find was clearly amazing, but because they were so clueless about how to properly excavate a site (and quite frankly didn’t give a shit), they damaged the disk with their spades and destroyed parts of the site, only to sell their loot as soon as possible for a few thousand German Marks to a dealer in Cologne.

In the two years after that, the items changed hands a few times, raising the prize to over a million DM and in 2002, finally someone with a sense of historical importance (state archaeologist Harald Meller) located the items and traced the original finders, who were forced to lead archaeologists to the discovery site.

Now, this is where the party began. Because while at first people didn’t believe the treasures were real, the dig and soil samples from the site showed evidence that supported the looters’ claims. Into the State Museum of Prehistory the items moved (and into court the two idiots went), and on the original location, the museum I now got to visit (Called ‘Arche Nebra’) was founded.

What is the Nebra Sky Disk?

In short, the Nebra sky disk is a bronze disk with blue-green surface, inlaid with gold symbols. It’s around 30 centimeters / 12 inches diameter and a weighs 2.2 kilograms / 4.9 pounds.

Along the side of the disk, there are two more golden arcs that were added later and supposedly mark the angle between solstices.

The final addition to the disk can be found at the bottom and is also an arch, but this time surrounded with multiple strokes. The meaning of this arch is uncertain, it’s been interpreted as a being a solar barge with numerous oars, but also the Milky Way, or even a rainbow.

The date is set at circa 1600 BC. and has been associated with the Bronze Age Unetice culture.

In June 2013, the Sky Disk was included in the UNESCO Memory of the World Register and termed “one of the most important archaeological finds of the 20th century.”

Replica’s of the disk at full-size

While the original Nebra Disk can be found at the Halle State Museum of Prehistory (Landesmuseum für Vorgeschichte), at the original location where the disk was found, there is now a striking visitors center with ‘golden’ roof that tells you all about the stories and interpretations of the disk.

The ‘Arche Nebra’ building was designed by Holzer Kobler Architekturen (in Zurich), completed in 2007, and is aligned with the large panorama window on the 30 m high lookout tower at the location of the sky disc. A glazed roof window also directs the view from the foyer upwards and establishes the connection to the sky.

In the museum, there is one main exhibition space and there is also a planetarium with regular screenings.

I first didn’t even notice it, but as soon as you enter the exhibition and enter the space, look straight ahead. You’ll see that the 3D objects in the room actually come together as the same imagery that you can find on the disk! How cool is that?!

When you then move around, the objects seem to change shape and you can have a closer look at the information that’s being presented. It’s a great parallel to the actual disk, because behind what you see at first glace, hides the knowledge necessary to understand the disc and the era it comes from.

Another thing that I liked, was how the massive windows give you a direct connection to the area around the museum, which is of course very important, as this is where the disk was found:

The exhibition feels very futuristic and has a great modern way of explaining the historical information about the discovery, analysis and interpretation of the finds, but one thing I believe they can improve is to also make the exhibition more accessible to non-German speakers.

There is an audio guide that you can get from reception that has a good English version, but I personally like to also be able to read the English text on the displays itself, as I’m not a very auditory-learner, I need visuals!

There are several sections to the exhibition, so let’s quickly guide you through them:

General History of the Area

You start with an overview of all the time periods, to give you a general idea of what place in history the disk can be linked to.

After that, you’ll get information about how the disk and the other artifacts were found at the Mittelberg plateau in the midst of a dense forest, about 3 kilometers from today’s visitor center.

The Mittelbergplateau is enclosed by an Iron Age ring wall and bounded by two section walls. The ring wall of the older Iron Age is partially restored in the form of a grassy mound. The enclosure is oriented in such a way that the sun seems to set every solstice behind the Brocken, the highest peak of the Harz mountains, some 80 km to the north-west.

Exploring the Disk and other finds

The second section goes a bit deeper into the disk itself and also shows the other artifacts that were found along with it.

Because the disk was found under such suspiscious circumstances, and without any archaeological context, it proved to be very difficult to accurately date it.

The precise dating of the disk was done by dating the Bronze Age weapons that were buried along with it. They did tests of the wood and gold on the artifacts and with all information together, they managed to narrow the age of the hoard down.

Many researchers believe the disk was used as some sort of astronomical calculation tool to determine planting and harvest times, which in that time was of course very important.

The Pleiades is a constellation that would have appeared in the sky in the autumn, which is harvest time, and disappear in Spring, when it’s time to plant the crops. Thinking of this, it’s also plausible that the third golden arc under the moon and stars is actually a sickle.

The blue-green ‘night sky’ background of the disk seems to once be more of a deep violet-blue, apparently by applying rotten eggs, causing a chemical reaction on the bronze surface.

Along the side of the disk are all these little holes and researchers believe they are for attaching the disc to something, perhaps a piece of cloth.

I loved seeing the details of the disk in the exhibition, which showed how it was created in four phases:

1 – Addition of the full moon (or sun?), the waxing moon and the Pleiades

3 – Addition of the arc at the bottom

4 – Restoration of the disk 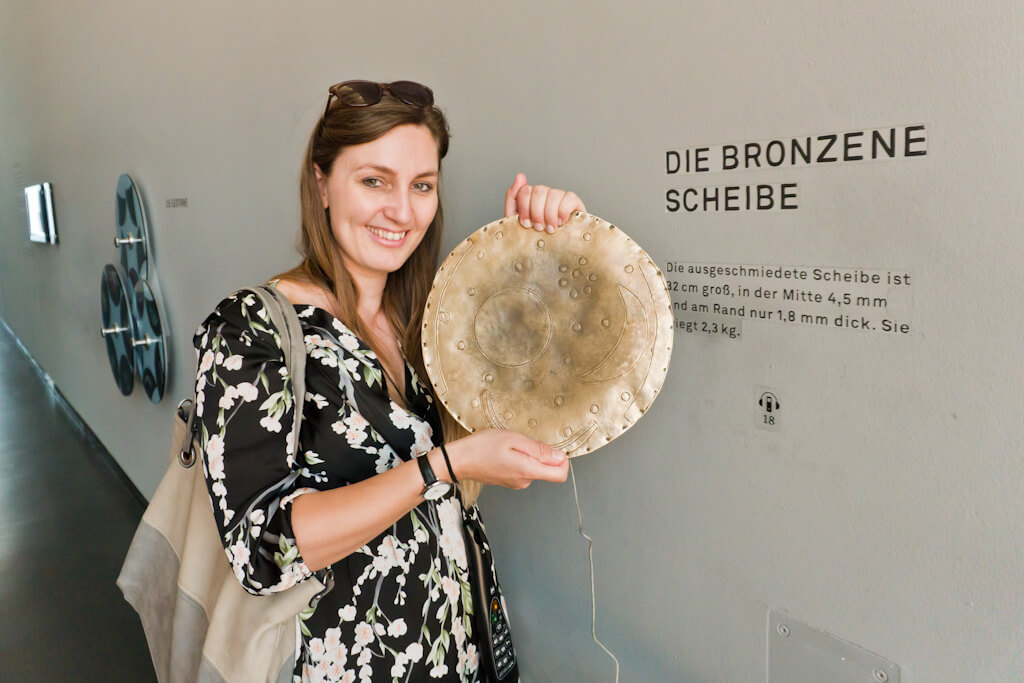 I know it’s just a copy, but still happy to hold it :)

One of the main features of the visitor center is the planetarium, where you can experience an immersive journey into the Bronze Age universe.

This is one of the few digital planetariums in Germany and the 22-minute show was especially created for the Arche Nebra.

The voice of the main speaker is that of Bernd Vollbrecht. In Germany he is a bit famous, as he also is the official German voice of Antonio Banderas. The music comes from successful film music composer Alexander van Bubenheim, who has been working in and for Hollywood for years.

Every half an hour, you can watch the show and it’s included in your ticket prize. While the show is in German, you can use your (also free) audio guide to listen simultaneously to the English version. Definitely don’t miss it!

There are a few more locations around the Arche Nebra visitor center that I didn’t visit, but might be of your interest.

First, there is the 30 meter high observation tower on the Mittelberg. Inclined at 10 °, it is shaped like the pointer of an oversized sundial. A vertical section divides the structure and marks the visual axis to Brocken: here the sun went down to the summer solstice.

Then there is also the “celestial eye”, which  marks the location of the sky disc on the Mittelberg.

The Arche Nebra and the site of the sky disc are located in the middle of the Geo-Nature Park Saale-Unstrut-Triasland, which is also great to explore!

Finally, the ‘Himmelswege’ is a trail connecting important archeological places in Saxony-Anhalt.

If you’re interested in history, archaeology and anything to do with our universe, the Arche Nebra visitor center (and perhaps after that the museum of prehistory) are definitely worth a visit! It’s such a unique find and story that you can’t find anywhere else in the world. It’s just incredible to see a confirmation of the idea that the astronomical knowledge and abilities of the people of the European Bronze Age were so far ahead, and probably even better than most people have today. While me might never find out the true meaning of the disk, it will forever stay with us as a reminder of the incredible universe we live in and all the mysteries it still holds for us!

Check out this video made by fellow travel bloggers Mike & Caspar:

Entry is €7,50 for Adults (Winter), this includes a visit to the Planetarium.

Entry is €9,50 for Adults (Summer), this includes a visit to the Planetarium + Special Shows.

For international guests, the main content of the permanent exhibition, all media stations and even the planetarium shows are available in six foreign languages: English, French, Spanish, Polish, Japanese and Chinese. This is free of charge.

Have a look at all our articles of things to see and do along the Transromanica Route:

Here are some great tours in the Saxony-Anhalt Region of Germany:

Disclaimer: I visited Germany as part of the #Transromanica blogger campaign (I visited the museum on personal request, because it seemed so cool!). For this campaign, I was compensated for creating content on our website and social media channels. All photos (except for the two photos from Arche Nebra that I credited to the original photographers) and words are our own, as always.