Take a break from the beach in Grado and cycle to the Roman town of Aquileia in Italy. Here you'll find statues, mosaics and even reenactments of history!

Just 10 km away from Grado, lies one of the most interesting historical towns of the Friuli Venezia Giulia region in Italy: Aquileia. This town was founded in 181 B.C. as a colony of the Roman Empire and features amazing art treasures dating back to this time.

Today it’s a UNESCO World Heritage Site and one of Italy’s main archaeological sites. I cycled from Grado to Aquileia and discovered Roman history is much more alive here than you would expect!

WHAT TO SEE AND DO IN AQUILEIA?

A visit to Aquileia is great for a day trip from Venice or Grado! Here are some of the highlights you don’t want to miss:

Cycling from Grado to Aquileia is easy with this long bike path, although it’s quite the peddle to get there (and back), so plan enough time to have some breaks and bring a drink and a snack or two.

Did you know you can find this same Romulus and Remus statue in Rome?

With three floors, this museum is the heart of the collection of artifacts and works from Aquileia. You’ll find sculpture, crafts and objects of personal adornment inside the building.

Outside, in the galleries, there are hundreds of inscriptions and monuments showcasing the social customs and beliefs of the inhabitants of the colony in ancient times. Unfortunately, I didn’t have time to visit it, but it must be incredible seeing so many artifacts together! 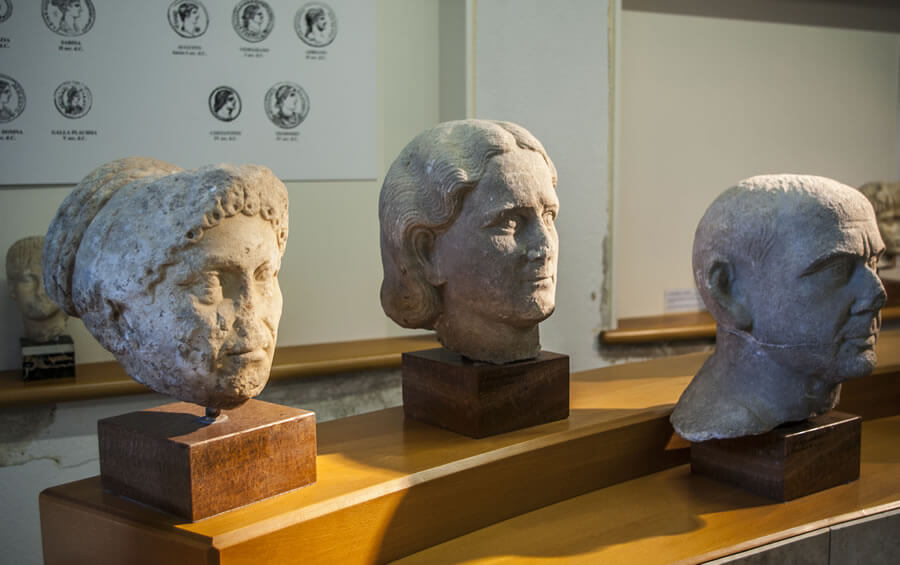 2. Complex of the Basilica

In the Middle ages, Aquileia became the most extended bishops-rich of Europe and the gorgeous Basilica is a lasting reminder of that time. This building has changed a bit over time since the original Christian design from 313. However, the mosaics you can find inside are one of the most ancient and amazing expressions of Christian art of the early decades of the 4th century.

When we were there, there was a wedding planning in progress, hence the red carpet :)

The incredible amount of mosaic floors are one of Aquileia’s greatest attractions. The Basilica contains the largest mosaic floor in the Western Christian world! It was installed before the year 320.

Floors like these were often commissioned for wealthy residences or luxurious thermal buildings. In the beginning, the mosaics were mostly made up from geometrical designs, but over time they also introduced more curvy elements and coloured designs as you can see below:

Make sure to also enter the wing on the left-side of the basilica (when you go inside), because you get to go a bit underground and see the foundations of the bell tower, as well as some more incredible mosaics:

It is believed that after an earthquake in 958, Patriarch Poppo had the facade of the basilica redone in Romantic style. In place of the once North hall, he built the 70 meter tall bell tower which then became a prototype for Friulian and Istrian constructions to come.

For a small fee, you can climb the tower and have a great view over Aquileia and its surroundings:

If you’re in the Bell Tower, make sure to look down from the platform when you enter the tower. There is an incredible mosaic on the floor below you!

5. Crypts of Frescoes & Mosaics in the South Hall

The crypt below the main altar in the basilica of Aquileia features decorative frescoes: a unique combination of Eastern and Western Christian art.

Another point of interest are the mosaics you can find in the South Hall of the baptistery, which you can see below. They have  turned this part of the site into a museum, where you can see the original mosaics together with research on what the complete floors must have looked like.

At present, only the western-side remains of the fluvial port of Aquileia. Ita was completely rebuilt in the Julio-Claudian age over Republican foundations along the right side of the Natiso River.

The heart of the old city was surrounded by a raised limestone-paved square with shops. Nowadays of course there are only a couple of pillars left, but they have been put up straight again, so you get a glimpse of what it must have looked like. 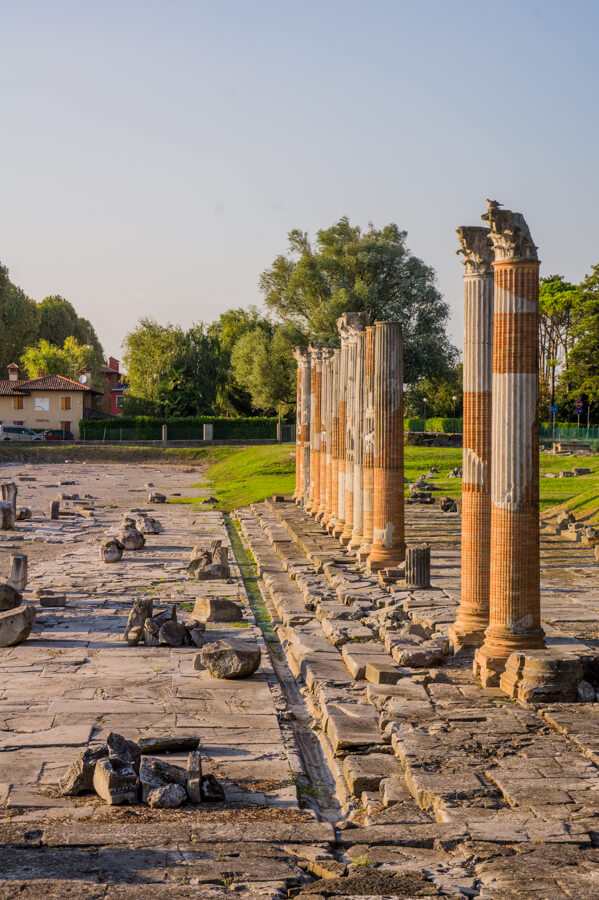 This “Grand Mausoleum” dates back to the Augustan era. It was found on the edge of the town at the end of the 1800s and rebuilt in 1955 along Via Giulia Augusta. Apparently, there are also many Pokémon hiding in this area, just so you know :)

During our visit to Aquileia, we got invited for a quick drink over at this wonderful Roman-themed restaurant! I will write a review of this place soon, but expect lots of helmets, busts of Caesar and the like. This is definitely a place the gladiators would love to hang out!

Behind the restaurant, you can find this burial ground, which dates between the 1st and the 3rd century AD. It comprises of five burial enclosures containing numerous cremation and inhumation burials.

While we were having a break at the Taberna Marciani restaurant, one of the people there told us about this yearly festival called ‘Tempora in Aquileia’. It’s been running for 5 years now and with the purpose of celebrating old times, over 500 re-enactors show in three days time what the town must have looked like in Roman times.

Everyone dresses up as Celtic and Roman inhabitants, so you can discover the everyday life of a Roman legionary or a warrior Celta. You can visit the old market, see the gladiators in the arena or participate in the celebrating dances and rites. They even have a Roman Ship arriving in the port as well as a big night battle, complete with Celtic funeral afterwards.

But there is much more: during the day, there are archery lessons, horseback rides, craft markets and many more activities for children and adults. How amazing is that?

For information about entrance fees and opening hours, please visit:

More about the Tempora Event:

See the glory days of Aquileia in virtual reality:

From the tourist information, you can hire a multimedia sat nav that will not only guide you through the most interesting archaeological sites, but will also enrich your experience with specific multimedia highlights available for each location.

This is the result of a long and complex project where archaeologists collaborated with experts in the field of virtual image reconstruction.

Disclaimer: I was invited to Grado by TBnet and Commune di Grado as part of the #FollowGrado campaign. All opinions and photos in this article are 100% my own.

Looking for more ‘One Day in…’ City Guides?