If there is one corner in Tokyo that I love most, I will have to say it’s historical Asakusa (pronounced ‘Asaksa’). It’s where I first arrived in 2006 on my solo trip and where I’ve been returning to in 2008 with my brother and most recently together with Nick -10 years since my first visit.

Asakusa began as an obscure fishing village along an estuary of Tokyo Bay, but the district later thrived as people arrived in increasing numbers to worship at Asakusa’s main temples and shrines, that you can read more about in this article.

So why love Asakusa? Well, there are a few reasons. First of all, because the hostel I stayed at on that first trip was wonderful and for me returning there is also returning to a place that marked the beginning of my travel blogger career.

Secondly, while most parts of Tokyo have turned into a concrete jungle of neon lights, designer shops and noise, Asakusa remains calm, traditional and most of the tourist masses leave at the end of the day.

Let’s have a closer look at all the things to do in Asakusa, including some practical advice and our most recent restaurant finds:

WHAT TO DO IN ASAKUSA, TOKYO?

Looking to visit Japan as an independent traveller, but need a bit of help? Meet ViaHero! This company assists your trip planning by pairing you with a local. This way, you have the opportunity to talk to someone who really knows the area well so you will get the absolute most out of your experience. They will give you ideas for authentic experiences, insider knowledge and even phone support if you need it. Start building your own customized independent trip to Japan here.

And if that’s not all, readers of The Travel Tester get 5% off the ViaHero planning service by using this link!

Looking to go bar hopping in Tokyo? Then check out Magical Trip for the best guided food tours in Shinjuku, Shibuya and Asakusa!

After arriving from either the Airport (from Narita with the ‘Keisei Narita Sky Access Line’ or ‘Keisei Main Line’ on the Keisei Line, or from Haneda with the ‘Keikyu Line’, followed by the ‘Toei Asakusa Line’) to Asakusa station, make a first stop at the tourist info, located on the corner of the main road, straight in front of the famous Kaminarimon gate that you cannot miss.

Pick up your Asakusa map and other Tokyo neighbourhood maps and perhaps visit the toilet while you’re here, even if its just to tick of one of those Japan Bucket List items: using a real Japanese toilet (and daring to press the buttons), haha.

You know you’ve entered tourist-world, when…

The Kaminarimon (Thunder Gate) is the first entry to the temple complex in Asakusa and makes for a dramatic entrance. It’s 11,7 meter tall, 11,4 meter wide and covers an area of 69,3 square meter, so it’s hard to miss!

While the original gate was built in 941, throughout the ages it burnt down several times, so the current structure dates from 1960. The most striking feature of the gate, the 4 meters tall chōchin (red lantern), weighs 670 kilograms and has a beautiful wooden carving of a dragon on the bottom (if you were wondering what those ladies in the picture above were looking at)

Ps. If you’re a Studio Ghibli fan, don’t miss the small Totoro Shop on the corner of Kaminarimon, just before going through it.

2008 with my brother Reinout

Passing Kaminarimon, you’ll get straight onto Nakamise-dori, a very touristy pathway of old shops selling typical Japanese food, sweets and souvenirs. Yes, there are cheaper places to get them, such as the Daiso 100 Yen Shops, but the atmosphere is quite nice here. Nakamise is said to be one of the oldest shopping street in Japan!

It can get crazy busy here during the day, so arrive early if you really plan on shopping here. Especially when it rains, it blocks up with umbrella’s and you can barely get through in high season.

After passing yet another gate (you can never have enough gates, right?), you’ll get to the main square surrounding the Sensoji temple.

Sensoji is Tokyo’s oldest Buddhist temple, built in 645 CE. During World War II, the temple was bombed and destroyed, but it was rebuilt later and is now a symbol of rebirth and peace to the Japanese people.

Senso Ji is also known as the Asakusa kannon temple. The story goes that two fishermen were fishing in the Sumida River when they pulled up their net to find a statue of Bodhisattva Kannon. Bodhisattva Kannon is known to be compassionate, relieving beings of their suffering. The Kannon Temple draws some 30 million visitors every year, remaining an important center of worship.

The Asakusa Shrine, also known as Sanja-sama (‘shrine of the three gods’) is located on the east side of the main hall, down a street marked by a large stone ‘torii’ (lantern-style statues). It honors the three men who founded the Sensō-ji.

Unlike many other structures in the area, this shrine survived the Tokyo air raids of 1945. 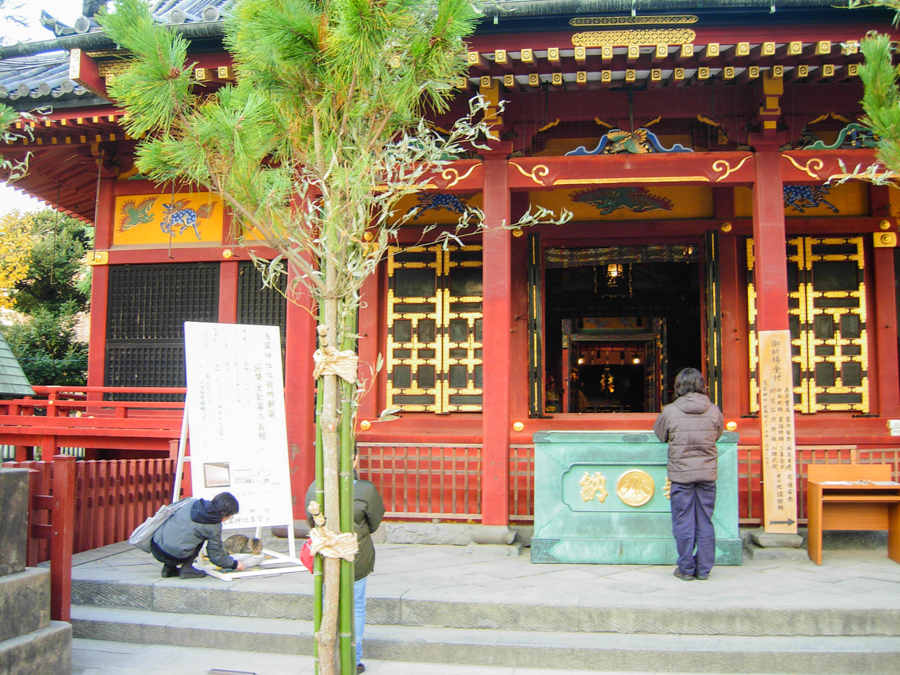 Make sure to wander around the Senso ji temple grounds and see the little bridges, ponds with koi karp, shrines and of course the 5-storied pagoda, which beautifully lights up at night.

This keeps amazing me. Back home they would have been gone in under 2 hours…

The pagoda looks amazing at night, as seen from the Sakura Hostel

If you’re looking for any original souvenirs, then you’ll love shopping in Asakusa. From traditional shops selling kimono’s, sake and wooden toys, to the brand new ‘Don Quijote’, where you can find 24 hours of anything (tax free) from make-up to green tea kitkats and from fresh food to dancing electric hamsters.

Let yourself be surprised :)

This shop sells everything made from green tea. Even ice cream! (it’s on the East side of Senso Ji)

I love the arcades, Asakusa has many of them!

Tokyo Skytree as seen from Asakusa

Super Cute Monchhichi Shop. I used to have these as a kid!

For some, this shop is heaven (read: me), for some it’s hell (read: Nick)… the Don Quijote!! It’s basically 7 floors of hystery, selling everything from food to electronics, all for a very good price! I was happy to see one opened up in Asakusa since last time I visited. The biggest one is still in Shibuya though.

Food lovers should definitely check out  Kappabashi-dori (dori = ‘street’). It runs parallel to Asakusa’s main street and is filled with anything to do with cooking, from pots and pans to knives, ceramics and even those plastic food samples you see here in the restaurants everywhere (called sampuru, after the English word for ‘sample’).
Most shops are open from 9AM to 5PM, and most shops are closed on Sundays and public holidays. The street runs all the way to the Ueno neighbourhood and it’s really quite a fun place to walk around.

You can even buy plastic sushi… if you like

From our room in the Sakura hostel in Asakusa, we looked out on the Hanayashiki amusement park. The park, that has been operating since 1853, is the oldest amusement park in Japan!

Hanayashiki originally opened as a flower park in 1853, but these days you can find over 20 different attractions and places to eat. You can even get a ‘ninja training’ in the park, or participate in a kimono and tea ceremony.

Next to the amusement park, there is some sort of a theatre, with actors sometimes surprising you in the streets. I assume you can go into the shop you can see in the background to get photos of yourself in costume as well :)

10. Have a Japanese Onsen Experience

Natural hot springs, Onsen, are very popular all over Japan. Every region in the country has their own hot springs and resort towns, but did you know that even in big cities you can find them?

In this Onsen in Tokyo, you have the chance to experience the health benefits of minerals added to hot water, which is supposed to have a relaxing effect on your body and mind. The Onsen in Asakusa, Tokyo, can be found on the top floor of the ROX Building and is called ‘Matsuri-Yu’.

Woodblock printing in Japan (‘Moku-hanga’) is a technique used in the ‘ukiyo-e’ art genre, but it was also used for printing books in the same period. Ukiyo-e flourished in Japan from the 17-19th century. Artists produced woodblock prints and paintings of such subjects as female beauties; kabuki actors and sumo wrestlers; scenes from history and folk tales; travel scenes and landscapes; flora and fauna and erotica. The term translates as “pictures of the floating world”.

In this workshop in the Asakusa neighbourhood, you can try woodblock making in Tokyo yourself.

WHERE TO EAT IN ASAKUSA, TOKYO?

The first couple times in Asakusa, I pretty much just ate ramen and went to Mos Burger (which is great by the way), but during my latest visit, Nick and I tried out some nicer places to eat as well, so here are our suggestions for Asakusa restaurants.

I hope you enjoyed this guide to one of my favourite neighbourhoods in Tokyo. Which activity above would you enjoy most in Asakusa?

The neighbourhood of Asakusa in Tokyo, Japan is know for it’s old-town atmosphere and historic Buddist temples. It is one of the most traditional districts in Tokyo. The finest part of Asakusa is centered upon several blocks around the centuries-old Asakusa Kannon Temples, or Sensoji, which itself is the main attraction of the area. Have a look at this map of Asakusa and Asakusabashi to find more things to see and do!