The Yaeyama Japan Islands are the most remote of the Okinawa archipelago. When we got an invitation to visit this destination as part of a blogger trip, we couldn’t even find it on Google maps right away. It was much further from the main island then we expected: it’s actually closer to Taiwan then to the rest of Japan! 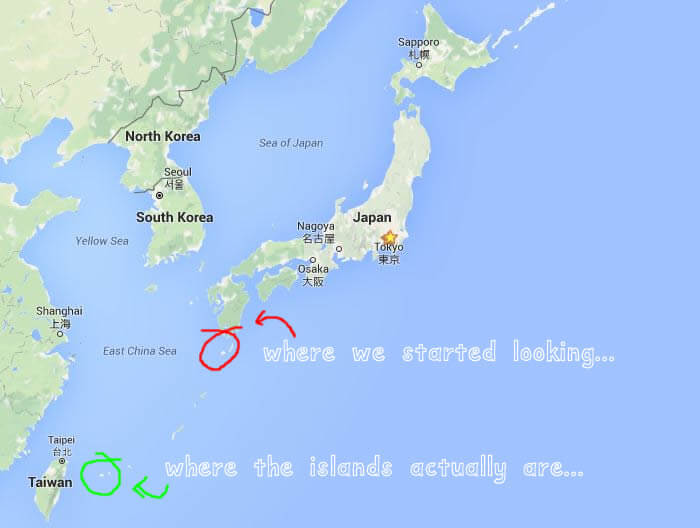 In the end we were able to find the islands after all and landed after a long, long day with 2 transfers on Ishigaki Airport, where we were welcomed by the sun and our cheerful host Yurika, who seemed proud to show us her home: Ishigaki island.

History of the Yaeyama Islands Japan

You won’t notice much of it today, unless you visit one of 34 military bases that you can still find active on the islands in this area -or wonder why you can find cans of spam in the supermarkets everywhere…, but until 1972, Okinawa was American territory.

Because of its strategic position between Japan and the continent, over 185.000 American troops used the islands as a stepping stone to the rest of the archipelago during the Pacific War in World War II. It was a bloody war, with over 75,000 Us casualties on the ground and 94% of the Japanese soldiers dying along with many civilians…

While the capital city of Naha is probably the starting point of most people’s Okinawa holiday and the island of Okinawa was center point of the Battle of Okinawa (more info here), we skipped this place and headed straight for the lesser known Yaeyama islands: Ishigaki, Taketomi and Iriomote.

The view when we arrived on Ishigaki Island… paradise!

Why you should visit Okinawa Japan

I always find that islands, of any country, have a special feel about them. It’s the isolation that keeps influences from the outside to a minimum, which usually lets traditions flourish. Same goes for Okinawa.

For example, the people of the Yaeyama islands have their own language “Yaimamuni” (Japanese is spoken as a second language), there are some typical Okinawan dishes like “Rafute“, “Okinawa Soba” and “Taco Rice” and they even make their own type of textiles (“Minsa“), that you cannot find anywhere else. And we were going to explore it all.

Of course, having a tropical climate, we cannot forget to mention the Okinawa beaches and the wide variety of water sports you can choose to do here. The beach of Kabira Bay ranks as one of the best in the world and Starsand beach on Taketomi island is famous for its star-shapes grains of sand. In our next blogs, we will take you to each island individually and show you the adventures we had, so stay tuned! 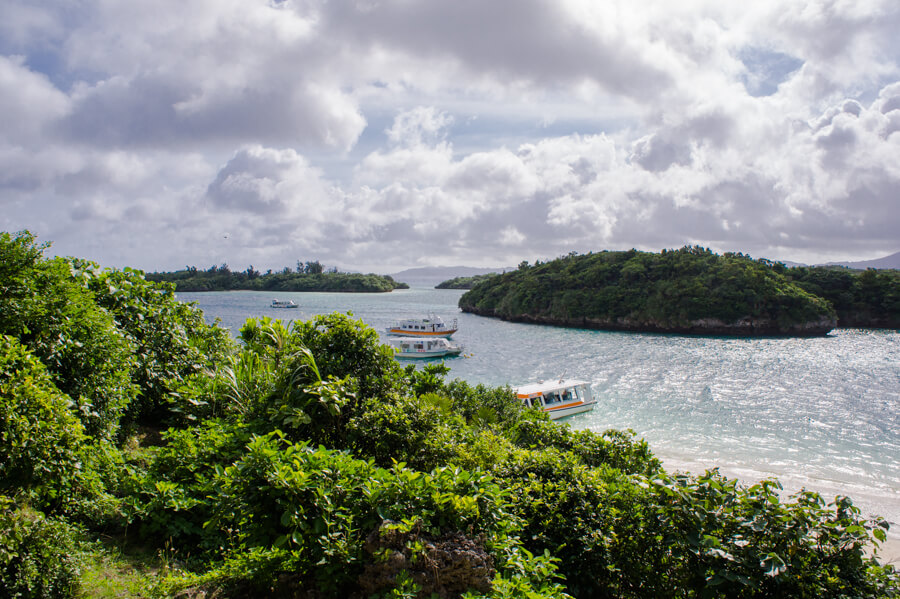 How to Travel to Okinawa?

The biggest transport hub is Naha City and airlines operate between this city and most major Japanese cities, as well as some international airports. You can also get a ferry between Naha and the mainland.

We flew from London (With ANA via Frankfurt (this leg operated by Lufthansa) and Osaka, which we don’t recommend to be honest, get a direct flight and save hours!) to Ishigaki Airport. You can also fly into Ishigaki from Naha or other Japanese cities (we left the island with a direct flight with ANA to Tokyo).

A small note on flying with ANA though, because while we liked the space we had on the flights and the entertainment and service of staff was good, we felt we didn’t get enough food during the long-haul flight: we only got 2 meals (which were just not very appetizing either, and by the time they reached us in the back of the plane, our preferred choice was gone), the first meal came already within 1 hour after departure, then nothing until arrival 10 hours later. We were starving on top of being total jet-lagged. On the leg Osaka-Ishigaki, we didn’t get any food at all (lots of Jasmine tea, though), even though that was an almost a 3 hour-long flight!

Between Ishigaki and Taketomi/Iriomote, you can get one of the regular ferries. There is English speaking staff at some of the ferry terminal desks.

English Speaking Desk at the Ferry Terminal in Ishigaki

Where to Stay in Okinawa?

Whether you’re looking for an Okinawa hotel or Okinawa Resort, there are plenty of options. We stayed over night in Ishigaki and Iriomote and both Okinawa hotels were great!

The private bungalow hut (in a separate little village next to the main hotel building) we got at the Ishigaki Seaside Resort was simply amazing. So romantic! It was very spacious, we got lots of beauty products (4 different types of shampoo and conditioner, in case of a really bad hair day I suppose…), a fully stocked fridge and  just so much choice at the breakfast (in the main hotel building).

If we had to point out something we didn’t like so much, it was perhaps that there were two single beds, not a double bed, although we believe this might be customary in Japan. Oh, and we had two MASSIVE spiders in our room, but it seemed those were put there especially for us, as the other couples said they didn’t have any. But…the jacuzzi on the porch and the short stroll to the hotel’s private “Sukuji” beach made well up for them. Lush!

Yes. Bigger then our London apartment

… and romance is gone again…

The Japanese don’t have a fixed shower like us, just a plastic ‘wet room’ (on the left here) with a handheld shower, guess a good excuse to bring someone along :)

Jacuzzi on the porch. NICE.

Pool or Beach? Well, turned out we didn’t have time for either of them… ahhh!

On Iriomote Island, we stayed in the recently refurbished Nirakanai resort, located on Tsukigahama Beach. Our room looked out over the ocean and the room was beautiful!

While again the beds were seperate, the mini-bar empty (just a bottle of water) and the bathroom was a bit too small for us, we did get to enjoy the swimming pool, the great food in the restaurant and had a really good rest at night with the sound of singing frogs in the background :)

You can walk straight from the lobby to the beach!

While no double bed, we did have a cool lounge-pad in the room!

Make sure to not skip the fresh fruit, especially the island’s famous pineapple… soooo good

We didn’t stay on Taketomi, as it made a perfect day trip from Iriomote and it’s just so small that one day is more then enough, but you could stay for example in the luxury resort Hoshinoya Okinawa, or any of the small, family-run minshuku (guesthouses) on the island.

What to See in Okinawa?

When you have decided where to go in Okinawa (of course we recommend the Yaeyama islands), it’s time to plan your itinerary. Again, you will have plenty of options on each island. In our next posts, we will cover all the islands we visited separately, so check back soon for the live link!

For your convenience, we have created a map with suggestions on what to do in Okinawa, that you could use on your phone… or print, we won’t judge!

Open this Okinawa map in Google

Bus selfie with Haruna from the Okinawa Tourism Board

While we still have plenty of articles coming up on Okinawa travel and Things to see and do in the rest of Japan, here are some articles written by other travel blogger that have visited some of the Okinawa islands:

Disclaimer: We were kindly invited by the Okinawa Tourism Board to experience the hospitality, culture, food and nature of the Yaeyama Islands in Okinawa, Japan. All photos, videos and opinions are 100% our own, as always.

I REALLY didn't know these places existed! The beaches look lovely. Thank you for the wonderful insight :)

Hi Shannon, neither did we! It was such a great surprise, like you're in another world! Hope you get to visit Okinawa one day. Safe Travels, Nick and Nienke

Hello! Hello! We're Nienke & Nick, a Dutch couple who met over 10 years ago in a hostel while travelling. We've since lived in Sydney, London and Amsterdam and are currently based in Zaandam in The Netherlands. Nick is an architect and Nienke has been a travel blogger since 2006. Together, we've travelled to over 40 countries on 5 continents and we're excited to share our stories and tips with you.