As you know, I have a love for places on earth that look like they could be on the moon or mars, or even some alien planet, so when I was told that on my trip to the region of Trentino in Northern Italy, we would make a stop at the natural phenomenon of the ‘Piramidi di Segonzano’, I was super excited.

Even though the pyramids are one of the most well-known and studied geological phenomena in the world, if you’re like me you probably haven’t heard about these natural pillars before, so let me tell you all about them!

HISTORY OF THE PYRAMIDS

In the town of Segonzano, at an altitude of 875 meters (2870 ft) in the Cembra Valley of Northern Italy, you can find an incredible natural work of art that reach up to 40 meters (131 ft). Meet the “Piramidi di Terra”, the earth pyramids, otherwise known as the ‘Omeni de Segonzano’, men of Segonzano, or just the ‘Piramidi di Segonzano’: the Pyramids of Segonzano.

Geologically, this site is considered to be fairly ‘young’, but they were still formed about 50.000 years ago in the Quaternary period, when the movement of the Avisio glaciers and the consequent disintegration of the mountain sides produced enormous moraine deposits.

These deposits (consisting of earth and small pebbles) were covered by a landslide of large porphyry boulders. Under the weight of the boulder, that almost look like hats these days, the soil becomes more compact (almost like cement) and actually protects the pillars from rain erosion. Just like a giant stone umbrella! 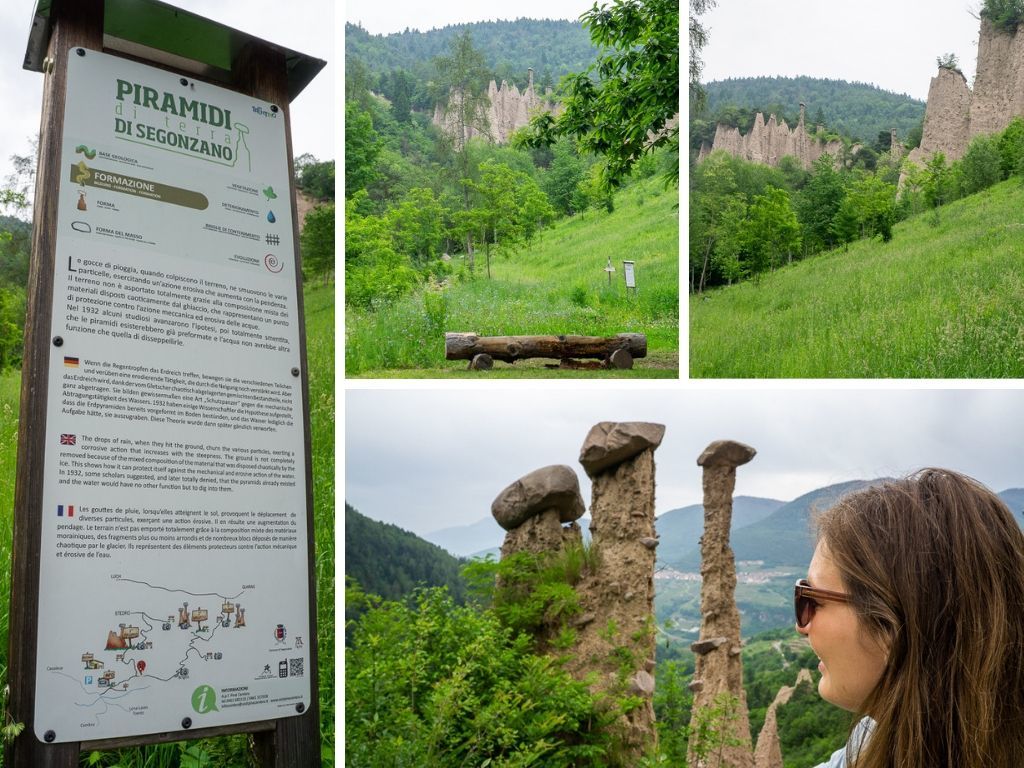 FUTURE OF THE PYRAMIDS

As you can see in the area, the pyramids come in all different shapes and sizes (cone, point and crest-shaped), and the ones without boulders on top are subject to a faster water erosion.

Luckily, the ground under the pyramids is not completely washed away, as it consists of a mixed composition of earth. Fragments of various shapes and sizes and the numerous large masses left by the glaciers, as well as a rich vegetation of mosses, leaves and roots, provide protection against the erosive action of the water.

That said, we did find some of the pillars and headstones crumbled on the ground unfortunately.

Earthquakes and heavy storms still threaten the area and the violent earthquake of May 1976 was clearly felt in Valle di Cembra (4.8 Richter Scale). During that quake, many pyramids lost their protective boulders, while some of more tall and slim formations faltered but resisted without collapsing.

Since the big earthquake, it has been found that the height of the pyramids that lost their ‘hats’ has decreased at the rate of one meter every five or six years. They are usually consumed entirely by atmospheric agents in less than a century, unless there is another ‘hat’ hidden inside the pillar that can become the new protection after it gets exposed by erosion.

As always, it’s not just nature doing it’s part, but man has it’s way of destroying natural phenomenon at a similar, if not faster rate. During the Great War, a battery of cannons practiced target shooting at the boulders of the pyramids… if you can believe it! Needless to say, some of the pinnacles got destroyed during that act of vandalism.

The site of the Segonzano Piramidi is open to visitors all year round and you can reach different viewing platforms by a specially equipped, clearly marked path.

Since we visited the area with a licensed guide, we also go access to the viewing point that you can see on the photos below. This is not usually accessible to visitors, as you have to climb over a barrier, there is almost no room to stand, no railing and a steep drop into the abyss.

So I would say: enjoy the photos (and check the video for more footage), but don’t attempt to get this photo when you’re there alone:

After walking over a clearly marked path, we reach the ‘bottom’ of the valley and look up to some of the pillars high above us. Now we get a real sense just how big these formations are!

At the bottom viewpoint, you can also find a big boulder that fell down after the earthquake and it’s incredible to stand right next to it and realize the enormous size of these things! Also, to stand so close next to (and touch) something so old is also really quite special, right?!

We continue our walk and reach the biggest viewing platform of the area, all the way on the top of the pyramids.

From here, you get a fantastic view over the valley and have the chance to get close to the tops of the Pyramids. As you can see, the weather was a bit grey when we arrived to the top, but nevertheless, the views were incredible and we took some time to relax at the wooden viewing platform reading the signs, talking and soaking in the beauty of the area.

Oh yeah, and there were selfies taken… lots of selfies…

Besides admiring the pyramids, a visit to this location isn’t just that. The path you follow goes through the forest and along the way you see beautiful wildflowers, small wildlife, hear lots of different birds and you can even pick edible wild strawberries!

At the end of the walking route, you end up in a wonderful quiet picnic area, from where you can see the pyramids in the distance. Bring some food and drinks if you want to end your relaxing day here.

I had a such a great day exploring the are of the Piramidi di Segonzano and I can highly recommend a visit if you’re also interested in nature and would love to see a landscape that seems to be coming straight from the moon.

Not enough of the Valle di Cembra? I can understand! In upcoming blog posts, I will show you more of the things we did in the area a journey through vineyards, along working farms, incredible waterfalls, wild canyons and excellent tasting of wine and typical local products. We truly experienced Trentino in Italy as a local and I hope you get to experience this one day as well.

See the Pyramids of Segonzano on Tripadvisor >>

Parking: From the A22 Brennero motorway, take the Trento Sud exit and take the SP 204 and then the SS 47 della Valsugana. Exit at Civezzano and take the SP 71 and continue to Segonzano. Before entering the village, there is a car park where the path to the Pyramids starts (clearly signposted). There is also a bar, fruit stall and free toilets to use.

Tickets: Access to the path is free from November to March, there is a 3 Euro (adults) / 1 Euro (kids) / 0 Euro (kids under 6 yrs / with Trentino Guest Card) charge from April to October. Count on a visit of about 2,5-3 hours (round trip). The height difference is 270 meters (difficulty of walking is medium-easy), so wear good, closed shoes and bring water.

Bonus Tip: Don’t forget to bring your camera with a nice zoom lens and/or binoculars to see the pyramids up close and personal.

Wondering what else there is to see and do in the Trentino region of Northern Italy? Have a look:

DISCLAIMER: I was a guest of Visit Trentino as part of the #Traverse19 Blogging Conference – All opinions, photos and videos in this article are 100% my own!

Very much useful blog on beauty and tips to maintain our beauty.This is the one of the best article I have read in recent days.Keep update and share your ideas..

Hello! Hello! We're Nienke & Nick, a Dutch couple who met over 10 years ago in a hostel while travelling. We've since lived in Sydney, London and Amsterdam and are currently based in Zaandam in The Netherlands. Nick is an architect and Nienke has been a travel blogger since 2006. Together, we've travelled to over 40 countries on 5 continents and we're excited to share our stories and tips with you.